Our Mission Part 2 : A Great Adventure

We are fortunate to have many different resources that connect us to our founders Peter Whyte and Catharine Robb Whyte. Our Archives and Library (which was the founding department of the Whyte Museum) holds all of Peter and Catharine's photographs, letters, books, sound recordings and videos. Over the years, our Archives staff have sifted through and processed 25 metres of textual records, 46,000 photographs (in various forms), 178 sound recordings, and 6 motion pictures. Needless to say, through all that sifting, our staff in the Archives have had ample opportunity to learn and explore what Pete and Catharine's lives were like here in Banff, and around the world during their many travels. This post will share some of our staff's favourite archival materials that have given them a glimpse into who Peter and Catharine were. 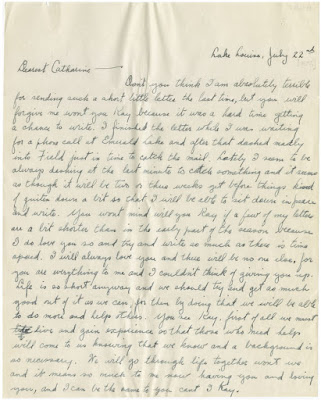 If we consider for a moment that 21 m of the total 25 m of textual records in the Peter Whyte and Catharine Robb Whyte fonds are of Catharine's papers, then we have a pretty good idea of who the writer was between Pete and Catharine. Peter even alludes to this in his letter:

"Catharine my dear, I am positively ashamed of myself for the stingy little letters I write and you are sending me the nicest, longest letter anyone could ever hope for. You are a peach Kay, there is no getting away from it..." (M36/I/A/2/a/65/9/5)

However, one of the letters written by Peter says a lot about Peter and Catharine's early relationship as well as his philosophy about his role in a community and life in general.

Dated July 22nd, 1928, Peter is writing to Catharine from Lake Louise while he is home working for Brewster Transport Co. driving buses and cars. Throughout the letter Peter expresses his love for the mountains and how eager he is for Catharine (who he refers to as Kay) to come visit and explore the mountains too:

Later in this letter Peter expresses how excited he is to see Catharine again in the Fall so that they can talk and philosophize about many different things that Catharine had been writing to Peter about:

"You have certainly made me think a whole lot Kay [...] We must be of some use or have a definite purpose on this earth or otherwise why should we have been put here."

"Is it not all a great adventure, one worthwhile making something of, and, a splendid opportunity to test our theories and give help to others along the way."


Photographs are another fantastic way to get a sense of someone's character, especially when they are true, candid shots. As our Museum Director Vince Varga quoted in the article Broad, textured, seamless by Rob Alexander in the Rocky Mountain Outlook's new Art of the Valley publication: "You look at photographs of Peter and Catharine and you can just see that their hearts were open."

"I haven’t read much of her letters, but I’ve looked at a lot of photos of her, and this is one of my favourites! It's also a reminder that she was a great skier."


A last staff favourite photograph of Peter and Catharine shows them in their element; hiking and painting in the mountains with their friends and fellow artists. It's hard not to smile when looking at this image as Catharine and Peter's laid back poses and Catharine's own infectious smile gives you the sense that they are experiencing those peaceful moments in the Canadian Rockies when life simple and good.


Based on these letters and photographs, it is easy to imagine how Peter and Catharine found a partner in each other and worked to improve the lives of the people in their communities. Early conversations and experiences in their relationship shows that they were similarly minded and helped each other to grow as people. Anyone who walks through the doors of the Whyte Museum and who looks through the material culture left by the Whytes can get a sense of their dedication to live a life filled with adventure while helping others along the way.

In 1851, a baby boy was born to James Brett and Catherine Mallon in Strathroy, Upper Canada. This boy would become known as Robert George Brett, or more commonly Dr. Brett. He would graduate from Victoria College Medical School, as a Medical Doctor in 1874.

After further education, work, and travel, Dr. Brett joined the Canadian Pacific Railway on its endevour to build the transcontinental railway in 1881. During this time he concocted the vision to open a hotel and sanitarium based on the use of the mineral springs found in Banff.

The site was selected and completed in 1886. At first it was called the Banff Hot Springs Sanitarium Hotel, but was shortened to Banff Sanitarium Hotel or Banff Sanitarium.
When one hears the word, sanitarium, we picture an old, run-down building with unbearable conditions. Perhaps they picture a place where people who were mentally suffering were sent away by their families. However, the Banff San…
Read more